A Stitch in Time

Something goes on at my place every Tuesday - we call it Stitch and Bitch.  It's a meeting of minds and bodies, hands and hearts, to share, catch up, support and sew (well, mostly we eat cake...).  Lots of tea is consumed, lots of laughs are had, lots of problems are solved, plans hatched...

We love an excuse for a proper Tea Party - Melbourne Cup (champagne and hats), one of us leaving for a Parisian holiday (eclairs and berets), a new baby due (pink frocks, pink plates, pink cakes - she's a girl!).  Whatever productivity we lack in terms of thread in cloth, we more than make up for as the threads of friendship are woven together, reinforced and overlocked as strong and colourful as any tapestry you can name.

My oldest son is coming up to twelve, so for almost as long, what started as a Mothers Group has burgeoned into an institution that not one of us would be without.  Lives have changed, houses have been bought and sold, kids have grown up, moved schools, but we remain a group of women who are alike and unalike, similar and different - all having something to give and something to take away.

It's school holidays now so we generally have a break (alas, my house no longer fits all the growing bodies of our children!) or we all meet together in a local park one Tuesday during the holidays for a good run around and a picnic.

Many of us have returned to work and can no longer come on Tuesdays - some make the odd cameo appearance when rosters permit, but we none of us are prepared to give up our little group entirely.  Kids and spouses all know the drill - Tuesdays are sacred, even if just for a few stolen hours.  For my part, I value the support and wisdom of my fellow Stitchettes enormously - seek their guidance, their input, cherish their style, their sense, their sewing ability...! 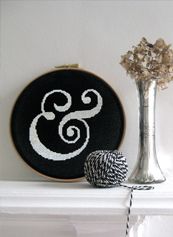 Speaking of, I recently indulged in a spot of online retail therapy here and am itching to start my next project (above) after the holidays.  It's been a while between cups of tea, but I think I can still remember how to cross stitch....  Wish me luck!
Posted by Garage Girl at 5:23 AM

Garage Girl
I'm a Florist in Sydney and a Mum, living in a tiny 100 year old wooden house. I like to look for a fix of something beautiful and inspiring in each day - nature, city life, friends, food... and getting lost in the details of people's homes.